Brave Face - Any Other Love 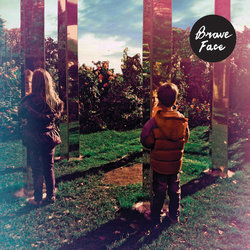 A sense of curiosity and wonder shoots through the layers of Brave Face’s new self-titled debut album. Like radiant lightning, the songs on this album provides a sense of illumination and starkness, such as the furious percussion and splintered-sounding guitars on ‘You Me & The Grateful Dead’ in contrast to transcendental beauty of the first single ‘Any Other Love’.

The three core members of Brave Face first met at Music School in Melbourne. Following the tangential fits and starts typical of early music projects, the ensemble took definite shape in 2012. Fuelled by the songwriting partnership of Jake Kagan and Chris Wright (Dart Farmer) and completed by drummer Thomas Van Der Vliet (The Endless Party). Brave Face have conjured a debut album possessed with as much playful joy as it is with devastation. The album is coloured with layers of surprising instrumentation that include full-sounding synth arrangements, dreamy, shape shifting percussion; as well as a filtering of disparate influences – from the quiet elegance of The Beach Boys to the casual flair of contemporaries such as Real Estate.

First Love Records are excited to present their self-titled out May 17. Here’s the first single lifted from the album.


Any Other Love is the first single from Melbourne's Brave Face. Unashamedly raw and honest in vibe, the track evokes images or like something out of a John Hughes film.