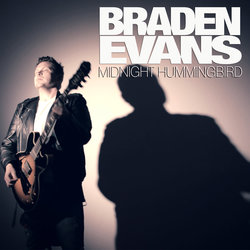 Sydney singer songwriter Braden Evans would often raid his father’s record collection and make mix tapes of The Beatles as a child. This early passion for The Beatles spawned not only his love for music but also his pop sensibilities. Then influences like Pearl Jam and Jeff Buckley, helped him shape the raw emotive and passionate voice that we hear today.

No stranger to the stage, Braden spent the early to mid 2000's fronting hard rock outfit Rivers-End. Releasing their debut EP through Bonza Records. The band received radio play from Triple M and Triple J. With tours up and down the East coast of Australia, Rivers-End played alongside bands like; The Screaming Jets, Birds of Tokyo and Gyroscope.

In a bold move to further develop his song craft, Braden sold his electric guitars and amps for an acoustic guitar and began work with American producer Lamar Lowder.

His debut solo album titled "Tempting the Thieves" was produced and released in November 2013 and afforded him the opportunity to perform at some great Australian venues such as the Enmore, Anita's Theatre and ANZ Stadium, alongside some music industry legends such as Richard Clapton, Billy Joel, Aerosmith and Van Halen.


Midnight Hummingbird is a feel good rocker that will have you tapping your foot and singing along by the second chorus.