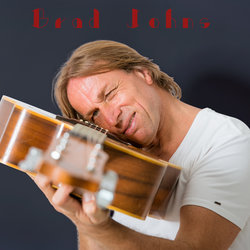 Brad Johns started out playing country music gigs with his dad Frankie Johns, his sister Karen Johns and brother Clay Bretton at an early age. By the time he was 18, he was touring, playing lead guitar for Diana Trask and Lee Conway. He went on to play guitar for James Blundell, Lee and Tania Kernaghan, Troy Cassar-Daley, Tommy Emmanuel, Mark O’Shea and many more.

Over the past few decades, Brad has developed into a staunch solo artist, playing numerous gigs locally and internationally. His work as a singer, songwriter and guitarist have earned him a large following. Brad draws on his ability to entertain an audience with his uplifting nature, then soothes and mesmerises a crowd with his heartfelt ballads and elite musicianship.

Brad says, Tommy [Emmanuel] told me "there’s no time like the present!", so I’ve decided to record a bunch of original tunes and I’ve rearranged two of my Dad's songs.

Brad says, “I’m hoping to return to Tamworth in 2020 as I love the excitement and the joyful atmosphere. It’s been a while since I was a backing guitarist at the Golden Guitar Awards. I’m excited about doing my own thing!”


Written by my father, Frankie Johns (who is a Country Music artist in his own right), expressing his love of this country, Australia. He was born and raised in Darwin and the Northern Territory and although he now resides on the Gold Coast, he loves returning to these places which hold a very special place in his heart.

Other tracks by Brad Johns: Tailgating
%