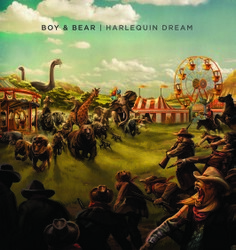 Delighting fans from the beginning with singles ‘Southern Sun’ and ‘Three Headed Woman’ and receiving laudatory early album reviews from media across the country, it seems that Harlequin Dream was always set to be an album destined for glory.

Following their platinum-selling, 5x ARIA Award-winning debut album Moonfire, Boy & Bear made a conscious decision to get back to their roots and record the album where it all began – Sydney. Recorded at the fabled Alberts studio, it was co-produced by Boy & Bear and Wayne Connolly, an ARIA-Award winner in his own right, and mixed by Seattle’s Phil Ek (Band of Horses, Fleet Foxes).