Bootleg Rascal - Asleep In The Machine 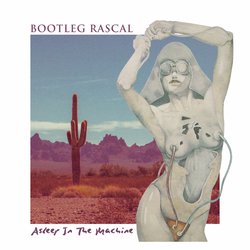 The band have been touring since they formed in mid-2013 when the group of misfits first met in the back room of a seedy Sydney gig. Bonding over their love of music and tacos and spreading/sharing tales of childish debauchery. Soon after, they hit the garage and crafted together their first EP of original material and toured – up and down the east coast - their first gig was playing Woodford Folk Festival in 2013/14.

Their dubalicious single ‘Oh I Know’ went straight onto Triple J on high rotation and picked up play on community radio stations including: 4ZZZ, PBS and 2SER.

They’ll be spending the next few months recording new ghetto-dub tunes for a September album release. Currently writing, recording, and catapulting ideas to the wall and seeing which of them are gooey enough to stick. Some times, that itself becomes part of the process… or the whole process. The excess drippings are then isolated and dropped onto a track to add a punch of flavour and aroma that’s identifiably Bootleg Rascal. If you’re lucky enough you just might be able to catch them in a seedy bar or enjoying a taco somewhere.


A band favourite on the record, 'Asleep In The Machine', sees singer Q-Dome in his element. The song maintains the unique Bootleg flavours with a sexy Rhodes piano and intergalactic guitar hooks laid down over a trip-hop beat.

Other tracks by Bootleg Rascal: Shade
%