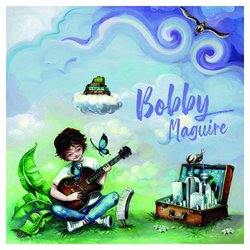 After surgery at the Royal Children’s Hospital stopped him playing sports, Bobby picked up the guitar and by sixteen he had already performed to crowds of thousands at music festivals, released two E.Ps and had a music video feature twice on Channel Ten. Bobby then moved to Melbourne to complete a Bachelor Degree of Music while singing and playing bass in a variety of bands. Back home to the beaches of FNQ and Bobby Maguire performed live on Balcony TV before releasing his evocative single ‘Breathe’ in April 2017 which achieved airplay on Triple R, reviews in NQ Music press, Skope Mag and much more.

Barely a month later Bobby composed and performed the entire score for a successful eighteen show theater production before enjoying well received performances in France and England. Returning home to Cairns, Bobby opened for The Cat Empire at the 2018 Commonwealth Games Festival before heading into The Studio Hutch, Cairns to begin production on his 2019 debut album out 29th November.


Home is the second single from Bobby Maguire's debut self-titled album. The song is a strong ballad with lyrics encouraging reflection, acceptance and immersion in loneliness and fear as way of healing and cultivating fortitude within yourself rather than relying on a physical place or another person to make you feel whole. Home is a presence not a place.