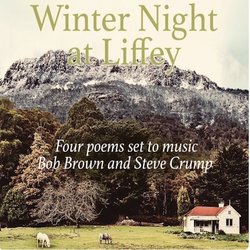 Bob Brown is Australia's most respected environmentalist, having been instrumental in setting up the Wilderness Society, Bush Heritage Australia and the Greens which he represented at state and commonwealth levels. He is a trained medical doctor and spent many years in the 1970s travelling and building up life experiences, many of which are written about in his poems from that time, published in "In Balfour Street" (NewPrint 2010). Four of these poems were set to music by Steve Crump, who had provided the music for Bob's 2017 "Christmas Message" from the Bob Brown Foundation. Steve is an emerging Tasmanian composer who has played piano since he was 3 years old but is only now able to give music the time and dedication he's always wanted to. For this EP, Steve conjured up thoughts about what the poems meant to him focusing on key events in each - in the case of the title track, the peacefulness of snow at the end of a night time storm at Liffey under the Taytitiheeker (Dry’s Bluff) above Bob’s farm house he shared with Paul (now cared for by Bush Heritage Australia). The tracks were recorded "live" at Reel to Reel studios in Margate.


This is a poem spoken by Bob Brown, Australia's most respected environmentalist, to music by Steve Crump. Bob recalls Katie had a humpy on the Glenn Innes common (near where he lived) and she was seen as very strange in those days. One night, my mother (just a few years old) heard Katie passing with all the farm dogs barking.