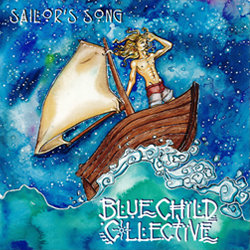 Fronted by Dan White, an enthusiastic collaborator, multi-instrumentalist and fingerstyle artisan, Blue Child Collective are a fluid groove n' roots outfit based in and out of Margaret River.

Delving into the creation of the Collective’s third album that features new single Sailor's Song, captured on the Mediterranean island of Corsica off the south coast of France, 'Building The Boat, Sailing The Seas – The Making Of Saturn Saw The Seaside', is their latest doco collab with globetrotting videographer David Owen Blackley.

The album itself, a 13-track effort featuring a 36pg illustrated booklet by Kiwi artist Pillow Talk, follows the story of White on a whirlwind sea voyage off the edge of the planet and off through the cosmos. Since it's release, 'Saturn Saw The Seaside' has seen the Collective knock out close to 200 shows across Europe and Australia, bringing both full band dance-offs and stripped back appearances to a rapidly growing global following.

Having supported acts including The Cat Empire, Sticky Fingers, Caravana Sun, OKA, Band Of Frequencies and many more, Blue Child Collective will continue as headliners in their own right, having already planned their next Australian tour in support of new material to be unveiled in 2018.