Bloods - Bring My Walls Down 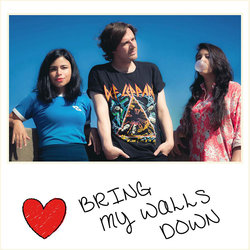 It’s been a minute or two, but Sydney’s Bloods have remerged and they’re treating you to a tasty free slice of new music.

Working with producer Shane Stoneback (Sleigh Bells/M.I.A/Fucked Up/Cults), Bloods are back in force, toeing the line between razor sharp skuzz and dangerously sweet pop more than ever before.

The wall-of-sound production that Stoneback brings to Bloods’ riot-grrrl-meets-girl-group shines in ‘Bring My Walls Down’ as the brutal-as-ever guitars are juxtaposed perfectly by MC and Sweetie’s glittery harmonies. Lyrically ‘Bring My Walls Down’ sees Bloods focus on the age old topic of love. In lead singer MC’s own words:

“BMWD looks at love as a disease, a kind of infection that infests your mind and body without you having any control over it; something that breaks through uninvited and reminds you that you’re an animal.”
Bloods had a massive 2015, having released their debut LP ‘Work It Out’ in AU and stateside. The band followed their SXSW showcases with a US tour alongside fellow Aussies The Preatures. They joined the Sub Pop publishing stable and wrapped the album campaign playing shows in Australia with Sleater-Kinney, Wavves and Peaches.


Fuzzy guitars and dreamy vocals. BMWD is a love song with lyrics that don't play by the usual mushy rules. The track is a shimmering nugget of bright and bold pop punk.