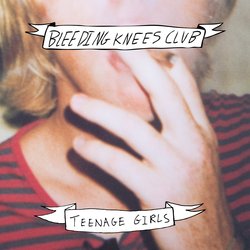 Recorded in New York City in-between the pair's frantic touring schedule this year, the upcoming album was produced by Dev Hynes (from Blood Orange and Lightspeed Champion), and then mixed in London by Dan Grech (The Vaccines).
It's an exciting demonstration of just how far and fast the party-hardy duo have risen since they recorded the debut 2010 EP "Virginity" in the back room of a shoe shop in their hometown.
Due for release in early 2012, Bleeding Knees Club's album encapsulates everything that's made the world fall in love with the band these past 18 months : it's a raw 'n' urgent set of super-fun songs about girls, getting high, and sticking it to The Man.

Bleeding Knees Club were formed by long-time friends Jordan Malane and Alex Wall on Australia's Gold Coast in mid-2010. They quickly won hearts and minds through a reckless live reputation and, on the recorded front, with rip-roaring EP cuts "Have Fun" and "Bad Guys".

Catch them wherever, whenever, however you can! Join the Club.

Other tracks by Bleeding Knees Club: Nothing To Do  -  Girls Can Do Anything
%