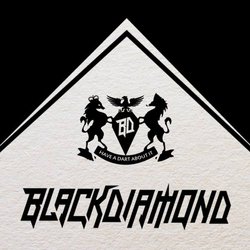 Think Australian rock ‘n’ roll band. Conjures up quite the image doesn’t it? There is, after all, something of a heritage. If you’re thinking little fella in a school uniform, big riffs, belting grooves and breathtaking live shows, BlackDiamond are going to be right up your street.

BlackDiamond aren’t just a splash of AC/DC attitude, they are equal parts a sprinkle of Queen glamour and a pinch of Guns N Roses pomp with more than a little 80s ceremony tucked in their back pocket.

Their debut album is quite the treat for anyone who appreciates honest, no frills, head shaking, rump rocking, straight down the middle rock ‘n’ roll purveyed by 80s legends such as Def Leppard, Jovi, Mötley Crüe and the like. You can call it Dirt Glam if you like.
If you like the sound of that, just wait until you actually hear it.

The album was recorded at Melbourne’s One Music studio 2012. BlackDiamond not only serves up unabashed tunage, but it comes fully fitted with the undisputable skills of production duo of Mark Opitz and Colin Wynne at the controls having worked with too many Oz bands worth their salt including AC/DC, INXS and Hoodoo Gurus.