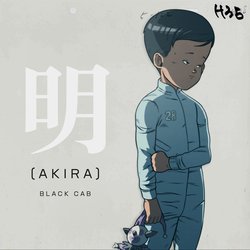 The forthcoming release, 明 (Akira), was inspired by classic Japanese sci-fi anime movies such as Akira, Ghost In the Shell, the Evangelion series and more. A blend of dark electronica, massed taiko drums and found sounds, the album is an alternative soundtrack to an anime sci-fi classic that is yet to be created.

Written and recorded by Black Cab, the album was mixed and mastered by Simon Polinski. For the artwork, the band commissioned UK anime illustrator Mike Anderson to create some fictional anime cells for the front and back covers, with Luke Fraser completing overall album design.

Black Cab will tour the album playing select launches in Melbourne, Brisbane and Sydney this August. Both Melbourne and Brisbane shows will feature live Taikos.