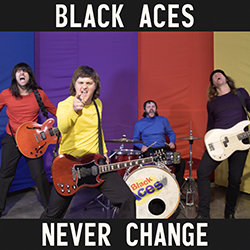 After developing a strong live following across their homeland and sharing stages with the likes of Cosmic Psychos, Angry Anderson, and The Casanovas, Black Aces released their debut album ‘Shot In The Dark’ in early 2016.

Through steady touring the album broke into the top 20 of the iTunes Australia rock charts, and the band ended 2016 with a show stealing performance at the Hard Rock Hell Festival in Wales, alongside such heavyweights as Molly Hatchet and Living Color.

Their second release, ‘Anywhere But Here’ was out in late 2017. Recorded with legendary producer Mark Opitz (AC/DC, INXS, Cold Chisel) and Colin Wynne (Bad//Dreems), the album delivered on the promise of their debut - a driving rock record by a band determined to play rock ‘n’ roll.

The band made it 3 UK tours in 18 months, as special guests on The Quireboys March 2018 UK Tour, garnering rave reviews and making countless new fans along the way.

Black Aces new EP 'Never Change', is scheduled for October 2019. Never shying from hard work, Black Aces are taking their new EP all over the East Coast before returning to the UK for the summer festivals in 2020.


There’s no mistaking what this track is all about - straight ahead Aussie rock, think Jet, ACDC, Airborne. Totally rocking right from the get-go, this up-tempo catchy killer tune will have them headbanging in their bedrooms.