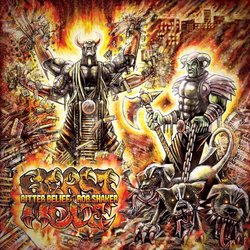 Beastmode follows up a grafting catalogue from Bitter Belief, developing nine mixtapes in as little as three years before crafting his debut LP Isolation which hosted a full support cast of some of the left coast’s illest MCs including Downsyde’s Dazastah, Jimmy Recard’s own Drapht and set to the production by Optamus, Rob Shaker and Creed Birch. Beastmode, however, is a fairly closed-door affair featuring only the bare few who complement the workings of Bitter B such as the blessing tones of Sarah Pellicano echoing his sentiment on ‘The Aviary’, Perth rappers Complete (‘Popcorn’) and the strangled, razored vocals of Beni Bjah (2015/16 WAM Song Of The Year Award recipient for ‘Survivor’) on ‘Don't Call It A Come Back’.


First song released of the upcoming album Beastmode LP. Produced mixed and mastered by Rob Shaker at Shake Down Studios.