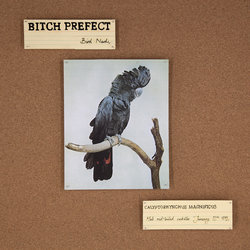 Adelaide-via-Melbourne trio Bitch Prefect have joined the pantheon of bands destined for life outside Oz (think Twerps, Boomgates, Dick Diver). With one hand in the Flying Nun bucket, and the other in that late 90′s Chapter Music sound, Prefect stir like mad and come out with their own brand of modern Australian pop music. Reeking of the hot desolation that comes out of Southern Australia, these guys are aggressive, relatable, and have somehow become the voice of young Australian twenty-somethings.

Recording all of their work either at home as a band, or with producer and longtime friend Jack Farley (in a warehouse studio which has in fact been home to most members at some point), Prefect also carry with them a strong sense of DIY, and are determined to show what can be done with a little inspiration and more than a little motivation.


An appropriate rendering of the universal feeling of being isolated by your own kind. Here is a mantra-like state of passive aggression, where Bitch Prefect channel what little energy they can summon collectively amongst the 3 of them. A beautiful venting against modern day frustration.

Other tracks by Bitch Prefect: Better Next Time  -  Adelaide