Birds of Tokyo - I'd Go With You Anywhere 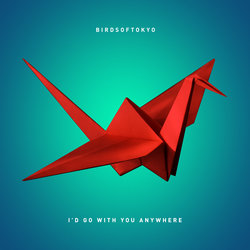 The group’s decision to relocate to LA had not been taken lightly. Since 2004 Birds Of Tokyo had gradually grown in popularity across Australia through nonstop touring, a series of acclaimed indie releases and several JJJ anthems. 2010’s breakthrough hit “Plans” opened more new doors and these gains were then consolidated by songs like “Wild At Heart” and “This Fire”. ARIA and APRA Awards followed but it was their song “Lanterns” that really changed everything. “Lanterns” became the most played song on Australian radio across 2013 and lead to all sorts of opportunities including a U.S. release – the first of the group’s career. It was time to start climbing a new mountain together.


“I’d Go With You Anywhere”, Recorded in LA and mixed back in
Sydney with Scott Horscroft (The Presets, Silverchair) it’s set to be THE Aussie song of summer.
Modern but organic; irresistibly uptempo.