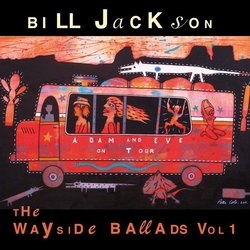 ‘The Wayside Ballads Vol 1’ will be Melbourne singer-songwriter Bill Jackson’s follow-up to his 2011 release ‘Jerilderie’. The songs on this record were handed over to Melbourne musician/producer, Shannon Bourne early in 2014 with a view to making a record that was more electric, eclectic and rocking than Jackson’s previous few. He last worked with Bourne on ‘Diggin’ the Roots’ (2006) and had great respect for him not only as a musician with an eclectic taste but also as someone who had an instinctive appreciation for the lyric and feel in a song. The songs were pre-conceived during ‘around the table’ acoustic sessions/conversation and essentially recorded ‘live’ over two days to capture ten performances from a band that had never rehearsed or played together before. The other common link on this recording is Pete Fidler, Jackson’s constant musical companion since 2006. They have travelled a long road together. A musician’s musician, Fidler got to showcase his electric roots and brilliance in a side of him here that people rarely get to see. Bourne brought in the brilliant rhythm section of Dean Addison and Roger Bergodaz and they proved to be the perfect foil for this group of songs.


Information travels fast these days. So much is going on and so many good, hardworking people are trying to stem the tide of so many things that are at risk. The party goes on against a backdrop of confusion. This was written against the backdrop of the ‘Occupy’ movement.