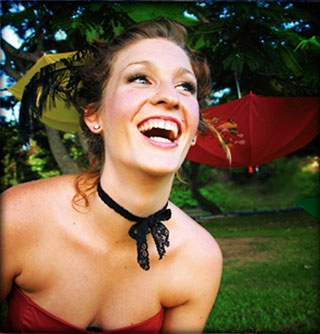 Not genre specific, but to be less precise, somewhere between Folk oriented jazz with a gypsy-roots twist…..possibly?

Having supported an array of artists including; Ash Grunwald, Deborah Conway, Tim Rogers, Clare Bowditch, Katie Noonan and Toni Childs (to name a few), not to mention current nominations for 3 Queensland Music awards, the group that originated from a solo core that built the foundations and frame of the unspecific music style now holds a core of members.

Depicting a hybrid of sounds from the highly analytical mind of the Virgoan front woman; Dinky Ragtime, Swing Dub, Muddled Mo-town, to a carousel raising mass of Cabaret folk- acoustic Blues and Roots. Influenced from stuff like Blue Grass artist Michelle Shocked to Fiona Apple and the numerous Classical, Jazz and Gypsy pieces studied in past times, Rolling vals, syllabic rhythms and a popularly entangled group of swing beats to rafferty the dude attempting to tap his beer in 4/4.

Delivered by the lips of a lady that hangs her chords from each vocal vibration, scaling a wall of rise and fall, Sian Evans is raw, polished and sultry aural pleasure to put a twinkle in your eye and a tingle in your toes……..


More a world flavour with the small orchestra accompanying, something of a Montagues and Capulets feel, or the opening scene from Edward Scissor hands, "the definition of..." in predominantly 6/4 time and a nice Latin bridge to twist, explores the depth of lifes philosophy and the definition of a name.