Benny Walker - All Ya Gotta Do Is Call - Internet Download 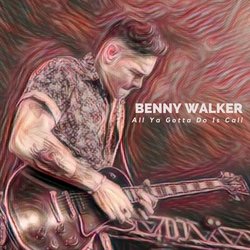 Crowned 2016 The Age/Music Victoria Awards; BEST Aboriginal Act of the Year Yorta Yorta singer/songwriter Benny Walker's got the lot; the voice, the songs, and the showmanship His love songs and epic tales are mixed with passion for people, the land, summer vibes and deep grooves that reach the soul.  Said to possess one of the best voices in Australia, Benny Walker never fails to take you on an emotionally driven sonic journey.

Debut album Sinners and Saints sling-shot Benny into the limelight landing him 4 NIMA nominations in 2013. In 2016 he gained another 4 NIMA noms for for Oh No You Don’t. This song heralded in a new direction and shot to No.1 on the AMRAP chart. In 2017 Benny's single GHOST and its EP both debuted at No.1 on the iTunes Blues Chart. It was then he captured the attention of Byron Bay Bluesfest boss Peter Noble who immediately booked him. 2020 sees the release of Benny Walker's third studio album.


A Blues belter of a track. This track hits the ground running with a deep groove from the get-go with its intro drum fill that is perfectly complimented by the ever-moving bass lines. Benny Walker holds down the repetitive and catchy rhythm guitar parts whilst production captures the Roomy, Vintage tones and delivers the next evolution in Benny Walker's sound.