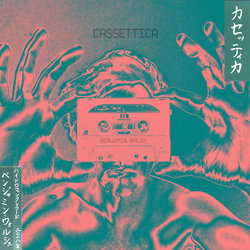 World-renowned percussionist Benjamin Walsh is excited to be releasing his new solo release ‘Cassettica’ through Hydrofunk Records and MGM on Friday December 7.

With the tracks recorded mixed and Mastered at Groovelands in Australia, the 7-track cassette includes the first single ‘Celestial Mechanics’ and was a Japan only release with limited copies now available through Hydrofunk Records. The digital release is available through MGM worldwide and also features 2 bonus tracks ‘Quicksand’ and ‘Just A Photograph’ recorded live in Japan.

Benjamin Walsh is a world-renowned percussionist and is legendary for his ability to adapt and fuse styles, creating and reinventing approaches to traditional formulas of rhythm and sound.

Ben released his debut solo album ‘Remix Experiment’ in 2017 through Hydrofunk Records. This first solo release coincided with the 20-year anniversary of Hydrofunk Records and was released here on Vinyl and also digitally worldwide.