Ben Salter - The Stars My Destination 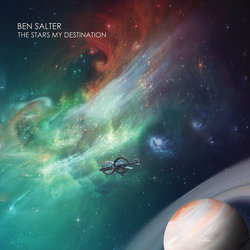 I firmly believe Ben Salter to be one of Australia's best singers, and if I weren't so god-damn competitive, one of its best songwriters as well." - Tim Rogers
Ben Salter has released his second album, The Stars My Destination. The follow up to 2011’s debut The Cat, it was recorded near Rockhampton where Ben’s sister and her family live and where Ben did a lot of his growing up. Produced by Dan Luscombe (Paul Kelly, The Drones, Courtney Barnett), Craig Pilkington and Salter, the album also features former Gin Club band mates Adrian Stoyles and Gus Agars, as well as special guests Liz Stringer, John Bedggood, Seja Vogel and Julien Wilson.

The result is eleven tracks very much rooted in the melodic head-space of good pop music, but each with a somewhat unconventional sensibility. Songs like lead single ‘Boat Dreams’, all jagged electric guitars and thunderous drums, sit alongside more introspective pieces like ‘I Gotta Move’, with its slide guitar and stirring string fugue, the haunting acoustic balladry of ‘Parrot Day’ and the epic space-rock of the title track, co-written with Australian artist and producer Aaron Cupples (Dan Kelly, The Drones, Kirin J. Callinan).


'The Stars My Destination' is the second single to be lifted from the album of the same name, an epic space-rock offering that is one of the highlights of the album.