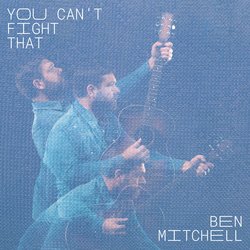 A troubadour at heart, Mitchell’s travels have taken him across the country and around the world, guitar in hand and an ever-expanding songbook on the go.

As a touring artist the majority of Mitchell’s shows have been solo acoustic. With his latest album he took the advice of friends and fans who wanted to hear a stripped back record, more in line with the vibe of those live shows.

For this new, raw and rootsy album Mitchell hooked up with multi ARIA award winner, Matt Walker whose analogue based studio high in the hills outside of Melbourne proved perfect for capturing the soul of country inspired folk and blues.


Facing an existential crisis, searching for meaning in a mad world where being your own worst enemy is top of your bad habits, You Can’t Fight That offers an insight into acceptance.