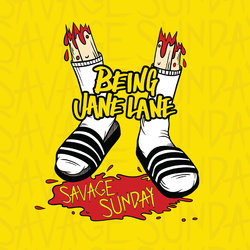 The debut album from Brisbane’s Being Jane Lane is coming October 1st! If you party hard enough on Saturday night, then you know you’re in for a SAVAGE SUNDAY. The all-female punk rockers from Brisbane have been working hard on the new album and are very excited to share it with everyone as they head out on tour to Adelaide, Melbourne, Gold Coast, Sunshine Coast and Brisbane in October/November with Stabbitha and the Knifey Wifeys.

The band is continuing to rise through the scene with their hard-core following of Beej fans, fems to the front screaming from the top of their lungs.

The debut album is a collaboration with Australian indie record label Human Records, manager/producer Guy Cooper signed them quickly after he fell in love with the band at Brisbane’s Zoo in late 2017. The band has supported major punk royalty Frenzal Rhomb, Goldfinger, Millencolin and Unwritten Law, becoming a finalist in the 2019 QLD Music Awards, performing at Laneway Festival with Girls Rock! and winning the QLD leg of the VB Hard Yards tour including supports for Alex Lahey, Waax, Raave Tapes and Tired Lion as they dropped the first 3 singles from the new album.

Other tracks by Being Jane Lane: Savage Sunday  -  All The Time
%