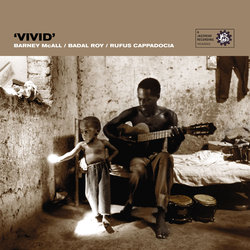 McAll, Roy and Cappadocia all reside in New York and enjoy successful careers. McAll playing with the likes of Gary Bartz, Kurt Rosenwinkel and Dewey Redman. Roy was the tabla player on such seminal recordings as Miles Davis' On The Corner and on various Ornette Coleman's Prime Time Recordings. Cappadocia, who plays five-string cello of his own design, which at times, can sound like an electric bass, and African violin or a middle eastern rabab, has performed with Odetta, Aretha Franklin and the Black Rock Coalition.

This unique ensemble has been performing in the USA and in Europe since 2002 developing the repertoire that is heard on the CD.

Afrobeat, Sufi music, Indian Ragas and traditional African music can all be detected as influences here and it is a mesmerizing brew that is both soothing and stimulating.


McAll displays an immediate feel for each pattern and the stamina to sustain them without sounding automatic. McAll also contributed some of the most successful solos, playfully blending his parts of the arrangements with bleeding voicings and darting accents"