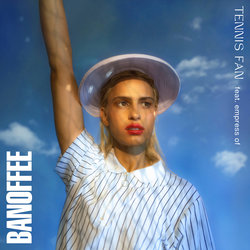 Banoffee has cemented herself as a singer, songwriter and producer with a musically transgressive and deeply vulnerable approach to music. She has toured with Taylor Swift on a worldwide stadium tour as part of Charli XCX’s troupe and represents the new wave of mutant pop bubbling up from the queer club underground. She has been described as one of pop music’s “recent great forward thinkers” (FACT) and is known for infectious melodies that belie more unsettling, experimental textures and beats.

Her debut album, Look At Us Now Dad, is an uplifting, optimistic journey that celebrates survival in the face of abuse and adversity. Featuring collaborations with SOPHIE, Empress Of, Cupcakke and Umru, and co-produced by Banoffee and Yves Rothman, it is a kinetic hybrid of experimental club sounds and earworm pop.

Written in the years after the artist moved to Los Angeles from Melbourne seeking a fresh start after a mental breakdown. Meticulously studying what caused her collapse Banoffee examined her life with a fine-toothed comb in order to reclaim her narrative, and grow from victim to survivor. Look At Us Now Dad tells a story of survival—of abuse, sadness, and loss—and is a testament to the possibilities of rebirth.


'Tennis Fan (feat. Empress Of)' was premiered via triple j Good Nights. Banoffee shares - "It's a song about rejecting the yuck stuff but it's just as much about celebrating the good stuff. I think this video does a great job of showing how strong friendships can make anything unkind feel unimportant and trivial."