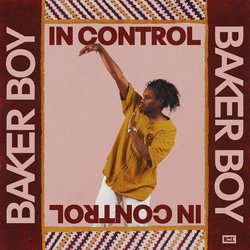 Baker Boy is a young Indigenous rapper who is doing things his way by fusing together traditional language Yolngu Matha and cultural elements and current modern hip hop culture.

For many years now he has been an accomplished dancer working for Djuki Mala (Djuki Dancers) and currently Indigenous Hip Hop Projects IHHP whilst performing and working all over the country in both hip hop and traditional styles.

His influences and inspirers include his own father who he believes he is following in his footsteps, Yirrimal, Gurrumul, Briggs, Gawurra and Yothu Yindi. All accomplished indigenous artist who are proud of where they come from and belong and their culture.

What we can expect from Baker Boy is a whole lot of energy, dancing, playing the Yidaki, inspiring youth and a young role model for the next generation.


‘In Control’ is the new single released by Baker Boy. Hotly in demand, the Melbourne- via – North East Arnhem Land artist co-wrote the single with award-winning writer/producer and multi-instrumentalist Pip Norman (Troye Sivan, CXLOE). Featured on the fresh track is the T.I.M.E (Thornbury Instrumental Music Experience) Crew of Thornbury Primary who contribute their raw and energetic vocals.