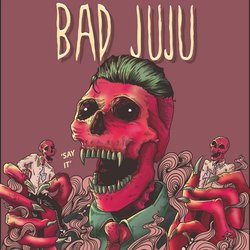 Bad Juju have entered into the spotlight with all guns blazing, and with a background playing in established bands such as, Confession, BLKLST, Jack the Stripper, Lovers Grave, and Earth Caller, it’s no surprise the Melbourne band know how to make an entrance.

Drawing inspiration from the likes of Citizen, Superheaven and The Offspring ('Smash' era), Bad Juju have formulated hard-hitting 90s inspired grunge and punk rock without forgetting their original roots in the heavy scene.

The band’s single, ‘Moving On’, captured the attention of Triple J and Triple J Unearthed, securing an add to full rotation on both stations, and scoring the band a slot as Unearthed featured artist.

In their short life the band has supported acts such as Mayday Parade, Trophy Eyes, Dream on Dreamer on their journey touring around Australia, as well as putting on a huge performance at Bigsound Festival in Brisbane last year.


This song is about standing up to someone you disagree with, but have never had to courage to go up against. It's about having the courage to say no when you know it's going to cause problems, but sticking to your guns and doing/saying what you believe in.