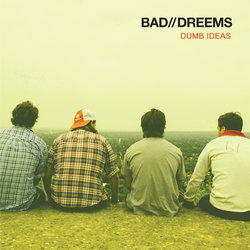 Bad//Dreems have been rolling along the coast lines of Australia and wowing audiences along the way with their explosive and infectiously fun live show. Sharing stages with the likes of The Scientists, Cosmic Psychos, Wavves, and Violent Soho, as well as festival appearance at St Jerome's Laneway Festival, Groovin The Moo and Boogie Festival, it’s been a pretty good start for this four piece from Adelaide.
Their last single “Dumb Ideas” was welcomed with open arms around the country and was a firm favourite at triple j, who hailed it as one of the “10 Best Aussie Songs of 2014 So Far”
Bad//Dreems are releasing “My Only Friend” off the back of a triumphant tour of independent record stores. The tour was a big success and saw many fans turned away at the door after sold out shows in Sydney, Melbourne, Brisbane and of course their hometown of Adelaide (twice).

Bad//Dreems are currently on a national tour with Sydney heavyweights The Preatures and have been tearing up the stage and strengthening their live reputation to even more sold out crowds.


Their latest offering is “My Only Friend” which highlights a different side to this dynamic band and exercises a more reflective tone that explores deeper themes of isolation, loss and self-doubt. Once again the band teamed up with legendary producer Mark Opitz (AC/DC, Cold Chisel, The Angels, INXS).


Other tracks by Bad//Dreems: Dumb Ideas
%