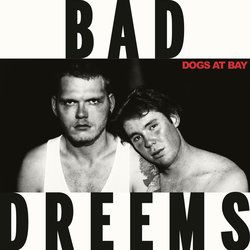 Bad//Dreems came into being in a white goods repair warehouse on an oppressively hot Sunday afternoon in the summer of 2012.

It had all started at their local football club. Over the season, in the smoky beer garden outside the post-match presentations, they bonded over their mutual admiration for groups such as The Replacements, Gossip-era Paul Kelly and the Coloured Balls. By season’s end it had been decided that they would meet to play music together at the warehouse, which sat on the bank of the River Torrens across from the West End Brewery.

They sweated out their hangovers that afternoon, with no plans except to make music they liked. A show would follow. That show led to another and then another; then some recordings; then shows interstate. And Bad//Dreems was born.

Bad//Dreems recorded their debut LP Dogs at Bay over a fortnight with legendary producer Mark Opitz (AC/DC, The Angels, INXS, Cold Chisel) and Colin Wynne at their studio in West Brunswick, Melbourne. They had previously worked with Opitz and Wynne on double A side Dumb Ideas/My Only Friend and found their foil amongst Opitz’ pop sensibility and vast experience.


‘Swimming through another Friday night, bathe yourself in the pokie lights’. Singer Ben Marwe sentiment could apply to anyone who yearns to break free from the manacles of their humdrum hometown. It's a song that speaks to the daily doubts that belie our hopes and dreams.

Other tracks by Bad//Dreems: Cuffed and Collared  -  Bogan Pride