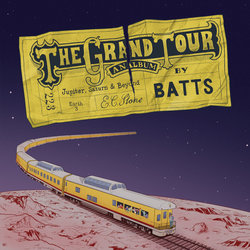 BATTS’ music is both emotional and powerfully executed. Inspired by space and novels, BATTS writes both about personal experiences and fictional characters.

In 2017, BATTS signed to THAA Records and released her debut EP '62 Moons'. 2018 saw BATTS selling out her EP Launch at the Northcote Social Club, taking the ‘Gun’ single tour up the East Coast, supporting Didirri on his National tour of Australia, and also complete her first International tour performing at a Communion Presents show in London, and supporting Cub Sport on their UK tour.

Having spent the rest of 2018 working on her debut album, and releasing two songs from the body of work, ’Gun’ and ‘Mars’ led to her joining the lineup of Project Mars - an event held in collaboration with NASA and SciArt Exchange.

On her debut album ‘The Grand Tour’, inspired by the infamous Voyager mission, BATTS worked with NASA and the University of Iowa to bring her concept album to life.

BATTS will be touring with American singer-songwriter Sharon Van Etten on her Australian tour this June.


'Overstayed Your Welcome' is the latest release from BATT's album, 'The Grand Tour'. With each song containing its own unique story, the record itself offers up a broader journey – that of the infamous 1977 NASA Voyager 1 spacecraft, launched.
Alongside authentic samples from the mission, BATTS has carefully crafted a debut record awash with thoughtful storytelling and heartbreaking honesty.