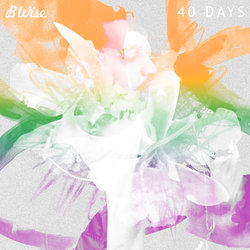 2015 was a huge year for B Wise. The buzzing Sydney MC played some of the biggest live shows of his young career and firmly cemented himself on the Australian music festival scene - winning a slew of new fans along the way.

Following a run of dates that included a national support for Tuka (Thundamentals), B Wise can now include the likes of Vince Staples, Yelawolf and soon (next week in fact) Freddie Gibbs on his live resume.

Festival go-ers would have seen B Wise at Listen Out (Triple J Unearthed Winner), The Plot, Newtown Festival and the FBi Radio SMAC Festival - also nominated for ‘Next Big Thing’ in the 2015 SMAC Awards.

Now B Wise delivers his brand new single ’40 Days’ – a groove ridden summer jam that sees him team up with producer Nic Martin, whose credits include some superstars like Urthboy, Seth Sentry, 360 and Illy.

2016 is shaping up to be another BIG year for B Wise, with his first major feature on Urthboy’s new album ‘The Past Beats Inside Me Like A Second Heartbeat’ and a brand new EP scheduled for May. Sky’s the limit for this emerging talent.