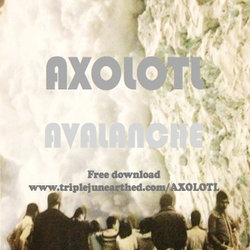 Collaborative project Axolotl was born in a home studio in 2011, soon after forming they released their debut single 'Garden Lane' to rave reviews, being described as “Worldclass” and given 5 stars by Triple J's Richard Kingsmill. The single launch and first headline show for Axolotl at Melbourne's Northcote Social Club was packed spurring the band on to pursue creating innovative sounds, pricking up the ears of audiences and industry alike going on to support acts such as Bonobo, How To Dress Well, The Bamboos and Daedalus. Axolotl released their debut EP 'Autonomy' in October 2012 and are back in 2013 having just completed a Workers Club residency with their killer new single ‘Avalanche’, which has already been received 5 stars by Triple j’s Dave Ruby Howe saying “they've outdone all my expectations with this new one”. This is a group of dedicated young artists who continue to pioneer new sounds. “Calling card for burgeoning new-wave Melbourne electronic underground– by the time you put your finger on it, they will have already moved on to the new and unexpected musical horizon” – Lance Ferguson (The Bamboos)
Keep your eyes and ears out for Axolotl as they prepare their debut album.


Once again Melbourne band Axolotl deliver an unmarked sound with their latest single Avalanche. Filled with layered synths and driven by the band’s live energy and the signature vocals of Ella Thompson, Avalanche delivers that cutting edge Axolotl sound. For lovers of Little Dragon, Grimes, Purity Ring and Chairlift