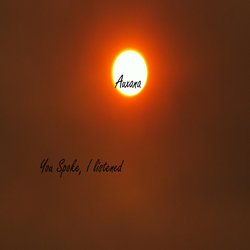 Auxana is songs composed by Ros Earwicker. Ros has always had a long held dream to record her music having written the first of many songs when growing up as a teenager. These songs were written from the heart and have either a story or a message to tell, a theme that has continued throughout her adult life.
Ros has been a Christian ever since she was young attending Selsey's East Beach Evangelical Church in the UK, before moving to Australia in 2008.
On arriving in Australia Ros felt she had a calling that she would ..."get into music...", several years later that began to happen and in 2011 began a year long process of recording her music. It was during this time that she was joined by session musicians Nathan Woodrow, (Guitars) Gareth David,(Bass/Violins) Luke Burton (Drums) and Nick Skinn (Drums).
The album title You Spoke, I listened was inspired after hearing God throughout the years. All the songs are deeply personal and very much faith based.
A second album is already planned, so keep up to date with Auxana over this next year of 2013.


About putting your trust and faith in God during really hard times, handing over to Him all of the burdens you face, praying to Him during these times of trouble knowing that you can rely on Him during those difficult times.

Other tracks by Auxana: El Shaddai  -  One Day
%