Ashleigh Dallas - I've Got You 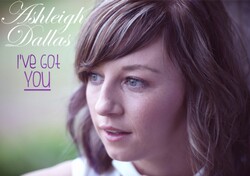 Growing up in the Dallas family, Ashleigh was performing on stage from an extremely young age. “Watching my Dad and his brothers as well as my Grandfather (Rex Dallas) play music together always made me happy. It made me dream of being up on the stage with my Dad and my brother and my family, sharing a common bond and love while singing and picking a guitar, and also sharing it with a room full of people. That is something pretty special”, Ashleigh states.

In 2013, Ashleigh released her debut record “Dancing With A Ghost”, which debuted at #2 on the iTunes Country Music Album Chart. On the back of her first album release, Ash scored herself two Country Music Award Of Australia (Golden Guitar) nominations (Female Artist Of The Year and Qantaslink New Talent), taking out the award for Qantaslink New Talent Of The Year in January 2014.

Ashleigh returns with her brand new Country Music Awards Of Australia (Golden Guitar) album 'Other Side Of Town' featuring 13 tracks written by Ashleigh, with co-writes with her right hand man, Ashleigh's Dad, Brett, released through the WJO | Universal Music Australia.


Realizing you’re going to be okay when you have that someone special or great people around to share your life and fun times with ... it's all going to be alright. I always dedicate this song to my husband Chris and it's probably as romantic as I get!

Other tracks by Ashleigh Dallas: Fear The Dark  -  Done & Dusted
%