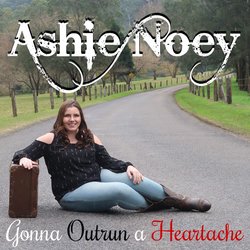 Music has always been a big part of Ashie’s life, drawing early influence from her Grandmother who was also a singer and is her biggest inspiration. Carrie Underwood, The McClymonts, Cam and Raelynn are also big musical influences for the 19-year-old Singer-Songwriter from Western Sydney.

From her early years Ashie was very involved in all her school musicals and had lead roles in both Romeo and Juliet and Gangster Paradise. She was also selected to sing the American Anthem in front of the American Leadership Ambassador.

Ashie has had a lot of experience competing in talent quests throughout NSW. She was also named the winner at the Rooty Hill Oscars with her acting performance.
Selected in the top 10% from 1600 entries, Ashie was invited to perform at the famous Hard Rock Café, Sydney in the “I want to be famous” showcase for emerging talent.

She has also performed at many western Sydney shows including the Blacktown, Penrith and Hawkesbury shows and had a solo residency at Vickie’s Café in Minchinbury, Sydney.

Ashie has embraced every opportunity to learn about the music business and has appeared in Taylor Henderson’s “Brighter Days” video clip and Amber Lawrences video clip for “I Will Love You”. These experiences have inspired her to pursue a career in the music industry.


Ashie Noey’s latest single “Gonna Outrun a Heartache” has once again been written by Nashville writer Dave Tough who co-wrote “Every Single Sunset” her last single. With great production from her producer, Rod Motbey, Ashie feels this is her favourite recording so far.