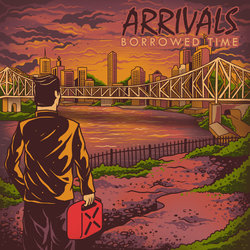 Arrivals are a Brisbane based pop-punk band formed in 2013 by the remaining members of Brisbane band "Sunsets". With 2013 drawing to a close, the three remaining members of the band felt it appropriate to start a fresh in a new chapter of the band's life, through which Arrivals was born. Arrivals begun 2014 strong on their East Coast Australian tour throughout January & February. The lead up to touring saw the band release the single "Driftwood" from their debut full length record "Borrowed Time", released on October 22nd 2014. After a successful album release show in Brisbane, and several close to sold out shows in both Queensland and New South Wales, the band released two more music videos for singles taken from the album.
Arrivals have a energetic live performance and a wide repertoire of songs demonstrating their musical progression in their time performing together. The track listing from their record demonstrates a variety of styles, ranging from fast punk style guitar rhythms and catchy vocal melodies, to heavy halftime sections, influenced by bands such as: City Lights and In Her Own Words. With everything they have accomplished in the past, the possibilities are limitless for ARRIVALS.


This song is about working at a dead end job where you don't feel appreciated (we've all had them), but it all makes it worth it when the weekend comes and we get to play shows and see our friends. This song also features our record's producer Nicholas Wilkinson

Other tracks by Arrivals: Loyalties  -  Made It Back
%