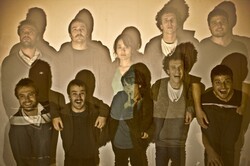 One day, after his star sign promised a ‘dynamic’ afternoon, Ambrose Nock (guitar) decided it was the right time to form a band known as Apricot Rail. He was soon joined by Jack Quirk (guitar), Matthew Saville (drums) and Daniel Burt (bass). The premise of the band was simple: music based on unique guitar tunings, the use of natural harmonics, and very open ideas about other instruments, electronica and song structure. After a debut gig at the Hyde Park Hotel in March 2008 with four members and as many songs, the band soon added a fifth in Mayuka Juber (clarinet/flute), redefining the balance of guitars with the addition of beautiful woodwind melodies.

In November 2008 the band headed into Kingdom studios under the guidance of Simon Struthers (Umpire, Adam Said Galore, Mukaizake) where the band recorded their self-titled debut. Australian fans got a chance to taste the new album’s sublime wares when the track ‘If You Can’t Join Them, Beat Them’ was released on the prestigious Spunk Singles Club compilation along with the likes of Leader Cheetah, The Dead Sea and The Middle East. The band was also recently nominated for Favourite Newcomer in the 2009 WA Music Industry Awards.


“The album’s crowning achievement has to be ‘The Parachute Failure’- it’s spine-tinglingly anthemic ... It so beautifully epitomises the band’s key strengths... powerful and emotive melodies that engage through the push and pull of delicate restraint and blissful abandon In a word: lovely.” – Drum Media (CD of the Week).

Other tracks by Apricot Rail: Pouring Milk Out The Window  -  Trout Fishing In Australia
%