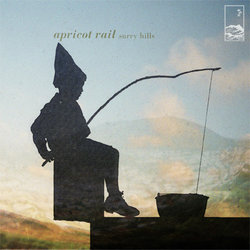 Formed in 2008, Apricot Rail is Ambrose Nock (guitar), Jack Quirk (guitar), Matthew Saville (drums), Daniel Burt (bass), Mayuka Juber (clarinet/flute) and Justin Manzano (guitar/electronics). In November 2008, the then-quintet headed into Kingdom studios under the guidance of Simon Struthers (Umpire, Adam Said Galore, Mukaizake) to record their self-titled debut album, released on Hidden Shoal in 2009. Since its release, the album has been wowing fans and critics alike, with feature album status galore across Australian radio, charting in US college radio (including a number 1!), and receiving glowing reviews left, right and centre. The band has also been nominated for Favourite Newcomer in the Western Australian Music Industry Awards.

The stunning new song from the much-beloved Apricot Rail that gradually blooms from a shimmering haze of harmonics and ride cymbal into a delicious interweave of resonant guitars and woodwind melodies. The song’s restraint becomes its strength as the hairs on the back of your neck slowly rise.