Antony & Cleopatra - Why Don't You Just Call Me 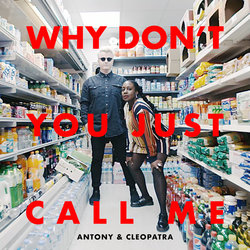 Fans will now have even more chances to catch the duo spin their infamous bangers ‘Dust’ and ‘Twitch,’ as well as last year’s stellar debut EP, the stunning Hurt Like Hell – including singles like the neo-disco record ‘Hard Feelings’ and the hypnotic title single. The duo are also prolific songwriters and collaborators – amongst other tracks, gig-goers can anticipate triple j smash ‘The Future’ (with Motez, now at 15M Spotify streams) and new dancefloor anthem ‘Slippin’ (Jaded / Black Caviar, supported by Don Diablo and Diplo & Friends) which has become the soundtrack of mega clubs across Europe.

This appeal that has been seizing the attention of dance music fans across the globe has now began to crossover to the mainstream. Last year’s single ‘Hurt Like Hell’ was quickly added to triple j, with the eponymous EP receiving support from Aussie tastemakers like Pilerats, Purple Sneakers and Stoney Roads, as well as international powerhouses like Martin Solveig, Complex, and The Kollection.


This new track is something new for A&C, sliding away from the house music they’ve built their reputation on over the last few years, instead slipping into a sparkling disco ball banger that is purely reminiscent of classic ’90s UK dancefloor hits.