Annie Bass - In Your Arms 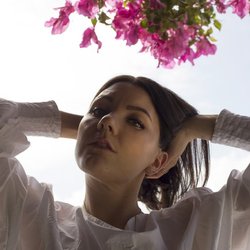 ‘In Your Arms’ follows the equally superb ‘Don’t Worry’ from December 2018, Annie’s acclaimed solo single ‘Don’t Want’ from 2017 and her two-track collaborative release with Christopher Port Thrown Away/Counting All. The two tracks will sit on the 6-track Control EP which will be the first release in a partnership between Opulent and the Mushroom Group.

On Control, Annie addresses some intense and deeply private themes including assault, mental illness and self-destructive behaviour. Each track is a chapter or glimpse into matters Annie has been brave enough not to shy away from and which cut close to home.

As with her songs, Annie’s live performances draw the audience into a private and cathartic space. Annie has performed at Australian festivals Splendour in the Grass, Vivid LIVE, Falls Festival, Big Sound and Groovin the Moo, and in support of Wafia, Alta, Touch Sensitive, Total Giovanni, No Mono, Elizabeth Rose, Banoffee and others.