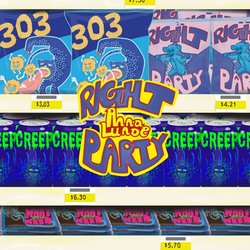 In the early days of Australia’s dance music boom, Anna Lunoe became known as one of the best emerging DJs in Sydney. Anna's career launched when she opened for acts such as M.I.A, Diplo, A-Trak, and Flosstradamus, and she became the first female to head Ministry of Sound AU’s Clubbers Guide compilation series — the three of which she worked on went gold.

Anna has now gone on to be one of Australia's most renowned DJ's, vocalist's, songwriter's and producers. Performing at some of the biggest festivals in the world including Coachella, Lollapalooza, Ultra, TomorrowWorld and Hard Summer.

Following on from extensive touring, production work, remix EP curation, and cultivating a fanbase from all corners of the world and Lunoe was approached by Zane Lowe to help launch the Apple Music-fronted Beats 1 radio platform alongside fellow hosts, Dr. Dre, Pharrell, Elton John and Drake.


Right Party is an absolute bop with a heavy dance bassline that is paired with an infectious vocal.

Other tracks by Anna Lunoe: Creep
%