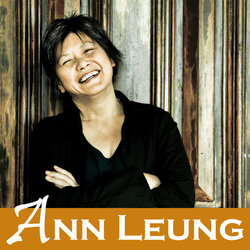 Singer/songwriter, Ann Leung believes there can never be too much "beautiful" in the world, and aspires to create "insanely beautiful spaces" through the energy and healing power of music.
Ann draws inspiration from the diversity of people, the simplicity of nature, and a burgeoning exploration of spirit to create honest evocative songs delivered in an authentic style. Her music has been described as “healing”, “earnest” and “quirky”.
Ann received classical guitar training as a youngster, and spent 25 years watching the guitar gathering dust in the corner. Her interest in music was re-ignited in 2009 after joining friends to create the all-girl band “Diddly Squat”.
Twelve months later, songs began to arrive unexpectedly, and launched her on a journey of musical and self-discovery.
Highlights have included: being featured with diddly squat as finalists on ABC EXHUMED 2013 TV series, performing live on national TV and ABC radio, opening the show for US Guitarist Richard Gilewitz, recording with renowned guitarist and musician Michael Fix.

Ann has twice achieved “Top 30” in the Australian Songwriters Association Songwriting Competition, and received commendations in many other Songwriting competitions.