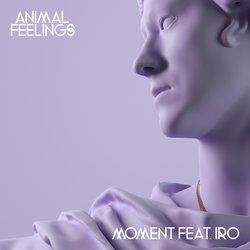 Oli has had an extensive and impressive career to date, and as an artist he has dabbled in various genres. He is known for his Sydney based dream-pop project High Highs, which was a collaboration with Jack Milas and Theatre Of Disco. With two releases under his belt via Tinted Records, Animal Feelings has seen huge success on his releases with 'Falling feat. Thief' garnering over 1.3 million streams across platforms and changing the pace with his funk fuelled jam ‘Pain Au Chocolat’. His works to date have received support from the likes of Majestic Casual, DJ Mag and MTV’s show Catfish, with the single ‘Divine Love’ featuring in a Ralph Lauren advertisement.


This track manifests his ability to create infectious melodies, blending with his perfectly crafted electronic grooves. Having first encountered IRO during an NYC busking performance, Oli explained he was instantly captivated. From this, a longtime friendship and musical brotherhood was formed, with ‘Moment’ becoming their first collaboration.