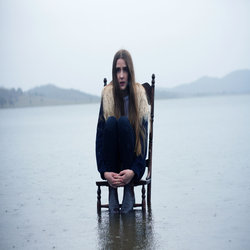 23-year-old Brisbane based Angharad Drake grew up on Australia’s famed Sunshine Coast, where she began writing music during her early years of high school. Influenced by the stylings of Feist, Laura Marling and Bon Iver, she began to develop her own individual style during her University years and recorded a self titled debut EP in 2010. Since then she has completed two more self produced EP’s (2013’s Lay Down, and 2014’s Swing), all in preparation for her debut full length album, Sword. Blending a mixture of folk storytelling, lullaby melodies and atmospheric harmonies the album infuses subtle influences from Folk virtuoso’s like Laura Marling, Jose Gonzalez and Joanna Newsom, whilst managing to maintain its own distinctive sound.

Now working alongside producer/engineer Samuel Joseph, and with her band (Alexander Mitchell on bass, Declan Kenrick on slide guitar and Alister Murray on Drums), Drake has now begun working on her next album release with the lead single "Baby" due out in late September.


“Baby” is an illustrious preview to her upcoming debut full length album. “Baby” has a hauntingly beautiful melody which is paired back with emotive lyrics to create one stunning tune.