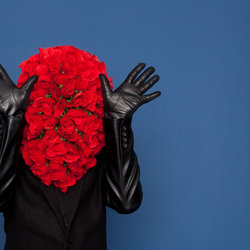 Hailing from Sydney, Australia and now based in LA, Andy Clockwise has proved to be one of the more compelling artists in independent music. 2014's EP Dancing World propelled him to a new level of success in the United States. Clockwise records, performs, produces, and mixes all his records.

Clockwise has fostered a loyal fan base and just sold out a national tour in the US with DYC (LA's premiere Indie Pop Dance Party). Andy has toured with The Black Keys, Julian Casablancas and Warpaint.

In late 2015 early 2016, Andy also released "Open Relationship." Both the track and the video feature Warpaint's Stella Mozgawa. Interview Magazine premiered the video calling it "intriguing," going on to say "sonically, the song sounds like LCD Soundsystem-meets-'80s disco and funk". When premiering the single, The WILD Magazine said "Open Relationship" has the duo tapping into "the louche swagger of Suede and Roxy Music as their voices playfully duel over a ripping bass line."

"Open Relationship" hit #1 on KROQ's LOCALS ONLY chart, with KCRW and Alt 98.7FM High Rotation on double J & FBI in Australia. The Good Book Debuted #15 on US Specialty Charts, tying with fellow Aussies The Avalanches.


The triumphant opener of The Good Book EP

"Existential and intimate utterances are illustrated among ear-worm keyboard hooks. A smart array of modern lenses that rejet the disco 70s & sleek romantic 80s as if it was re-imagined by the entire DFA artist roster.” - Impose Magazine.