Amen Mustang - Someone To Somebody 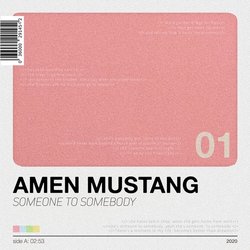 Growing up with 3 older brothers who were all involved in musical theatre is was inevitable that music would be part of Lathlean’s life from an early age. The very first song to inspire capture him was “Love Cats” by The Cure. “I remember the day my eldest brother put on a CD in the car and the song “Love Cats” by The Cure came on. My ears pricked and he looked over to me and grinned as if to say “aghhhhh knew you’d like this”.

Now fully formed as a songwriter & producer, Lathlean is exploring more complex sounds & textures in his music while still emphasising a danceability to it. “With ‘Amen Mustang’ I’ve tried to blend acoustic, raw sounds with heavily synthesized instruments. It’s a winning combination. I can thank Tony Buchen’s guidance (Montaigne, G Flip, Courtney Barnett) for teaching me that” says Lathlean.


"Someone to Somebody" is a bit of a love letter to a fictional crush. I don't believe that everyone has only one potential true love, not everything happens for a reason. This song hints to the idea of falling in love with someone you haven't even met yet.” – Sam Lathlean / Amen Mustang