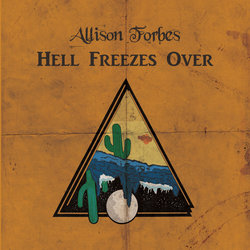 “….She is a tobacco and whiskey soaked diamond in a world of sugar-coated fakery.” – Lachlan Bryan

Tamworth’s own rebel child is a breath of fresh air and an outburst of originality in songwriting. Allison Forbes is a new-age outlaw of country music.

What a year she’s had! Allison hit the road full-time, touring the countryside in her poptop caravan, taking her unique blend of folk-infused country music and many years of entertainment experience all over Australia.

The lead single “Hell Freezes Over”, taken from her forthcoming debut album has had a massive response being called “raw”, “rare” and “powerful”. She’s performed with the best of the best and played the most esteemed festivals in the country (Tamworth, Airlie Beach, Gympie Muster, Nimbin Roots). The new record, along with her previous releases, have been engineered by award-winning producer, Shane Nicholson and if the first single is anything to go by, expect a heavier, more alternate sound from the new record.

Allison has well and truly secured her spot tightly in Australia's alt-country scene. Through insightful lyrics and addictive melodies, her stories will charm the pants off you. Her voice soars easily through any style with strength, warmth and consideration.


A strong evocative song about overcoming the past. Realizing the mistake and moving forward regardless of how painful it is. A powerful and heftier alt-country sound for Allison Forbes in anticipation of her debut album ‘Bonedigger’ to be released in November. It pays homage to Allison’s rock background with her gravelly roots still imbedded into her love of gothic country.