Allan Caswell & Michael Carpenter - Back When I Was Older 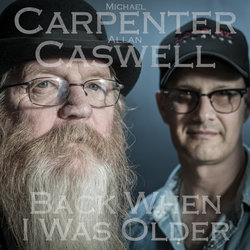 Apart from his work as an in-demand record producer at his Love Hz Studios, he released a guitar pop solo album called ‘The Big Radio'. He follows that up with his alt. country project ‘The Cuban Heels’ and their new album "Ain't Nothing Left To Say” (featuring the iTunes hit“ I Should Have Told You”) next month. He's also part of the new country combo ‘The April Family’ who are in the final stages of recording their debut album, and have 2 successful singles under their belt in 2016.

Allan Caswell needs no introduction. With 7 Golden Guitar awards to his name, he’s no stranger to the Australian Country Music scene. He’s recently released his new album “50 Years In Oz” celebrating his long and incredible career as a vocalist and prolific writer. Caswell recently broke his own record for the number of songs recorded in a single year... “Back When I Was Older” is number 54 for 2016.
The pair are now in discussions about the viability of turning this one off single into a full-length album project. Carpenter finishes saying.. one step at a time. Let's see how the single goes first!”


Back When I was Older was born from a co-writing session between multi-golden guitar winner Allan Caswell and prolific songwriter/producer, Michael Carpenter.