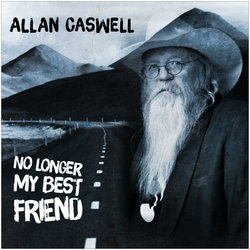 Allan Caswell arrived in Australia as a migrant in 1966. In the 50 years since then, he has become one of Australia’s most recorded and successful songwriters with over 650 of his songs released worldwide.

He is the writer of “On The Inside” the theme for the hit television series Prisoner and IN 2016 he won his 7th Golden Guitar at the Country Music Awards of Australia. He has released 16 albums of his own songs. He has won an ARIA, an APRA Award, 10 TSA Awards and 9 Southern Star Awards.

His career as a performer has taken him to nearly every town in NSW, Every state in Australia, New Zealand, The USA, East Timor, Kuwait, Iraq and Afghanistan. He is the “go to” co writer for a number of Australia’s to country artists.


No Longer My Best Friend is probably his most autobiographical song ever and is written for his wife Marian. It was co-written and co-produced in Melbourne with Damian Cafarella and is the start of Allan’s classic country album Mexico, which will be released early next year.