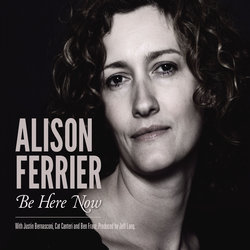 ‘Be Here Now’ is Alison Ferrier’s follow up album to her debut LP Sugar Baby (2012); and will be released on Friday 5th June through MGM. National and regional tour dates have also been announced to coincide with the release.

Produced by ARIA award winner Jeff Lang, this is Ferrier’s first recording featuring a full band.
While retaining the intimate and revealing storytelling songwriting style of
‘Sugar Baby’, ‘Be Here Now’ demonstrates her artistic growth and emergence as a forceful performer.

'Sugar Baby' was released in 2012, and quickly established her reputation as a songwriter to watch on the Melbourne music scene. Ferrier’s songs have been recorded by artists such as Suzannah Espie, The Junes, and Jeff Lang.

Ferrier began her musical career in Melbourne playing acoustic guitar and fiddle with country duo The Wayward Fancies. In addition to establishing herself as a solo performer, Alison has been an active presence in and around Melbourne with her distinctive singing and fiddle playing often heard accompanying artists such as Chris Wilson, Jeff Lang and Suzannah Espie.

She is also a member of the band Ravenswood and has toured Australia and Europe as a member of Sean MacMahon's Western Union.


Be Here Now: The sound of a Christine McVie-fronted Fleetwood Mac playing a Lucinda Williams song. Tasty electric guitar and pedal steel add sweetness and tang in just the right measure to a song about staying focused on what is really important.


Other tracks by Alison Ferrier: Damned If I Do  -  Made For Each Other
%